From the very beginning, David's career has been characterized by a wide musical interest. Born on 21st July, 1960 in Hilversum, into a family where music took a central role, David began piano lessons at six years old, followed by oboe, bass guitar and double bass. David's first bands played a combination of Latin, Jazz en rock, anticipating the later ‘Fusion’.

David completed studies in bass guitar and double bass at the Hilversum Conservatory. Took lessons arranging with Jerry van Rooijen, Rik Elings and Kenny Napper. Since 1985, he has been teaching at the Conservatorium van Amsterdam. He has given clinics and seminars on Jazz, pop, Latin, rock, fusion and Indian Rhythms in the Netherlands, Belgium, Germany, Norway, France, Danmark and the School of Music from the University of Miami. Tours have included Spain, France, former Yugoslavia, The Gambia, Curaçao, U. S. A., Canada and South Africa. 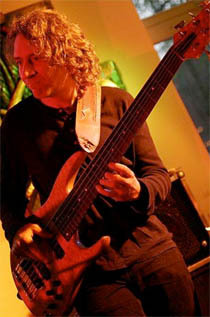 “As a bass guitar player interested in the music of Zappa and Mahavishnu in the late 70's, having played more complex jazz-rock with transfusion and contemporary classical music with the Volharding in the 80's followed by the Dutch radio orchestra's and the René Engel Band in the 90's, it was a logical step for me to go deeper in the more complex rhythmical structures of South-Indian music as offered by the course Contemporary Improvisation through Non-Western Techniques. After taking the four year programme and additional workshops with Jahnavi Jayaprakash and B.C. Manjunat, I now feel much more equipped for the music of the 21st century.”

Musical-director and arranger for the musicals: