Jos Zwaanenburg is currently a teacher at the Conservatorium van Amsterdam teaching 'Contemporary Music Through Non-western Techniques', 'Advanced Rhythm' and 'Live Electronics'. Zwaanenburg is also a guest lecturer at the music departments of York University and of Oxford Brookes University where he has been appointed as a Research Associate.

Zwaanenburg graduated with distinction from the Amsterdam Conservatory in 1985 where he studied flute and composition. In the previous year he won the Gaudeamus Interpreters Competition, receiving an honourable mention for performing his own compositions. Zwaanenburg completed an M.A. in musicology and contemporary performing arts at Leeds University (in 1998), and studied Karnatic music theory privately with Rafael Reina since 1996, leading to further studies in India with Jahnavi Jayaprakash and other top Karnatic performers.

He has performed classical as well as improvised music extensively throughout Europe, the U.S., South America, India, Russia and Japan, giving solo performances and playing as part of orchestras and chamber music ensembles. Many composers from around the world have written works for him.

Zwaanenburg is known for his research into extended playing techniques for the flute, combining his interest in performance, theatre, composition and the use of live electronics. He is also known for initiating the development of the open hole alto flute in co-operation with the Dutch flute makers Eva Kingma and Dirk Kuiper in 1986/87, often using it to display his command of these extended techniques.

Zwaanenburg has conducted groups such as 'The Barton Workshop', the English 'Cornelius Cardew Ensemble' (which he founded and of which he was the artistic director), the 'AXYZ ensemble' and various other groups.

Zwaanenburg has published scores including studies for contemporary flute techniques and has given lectures, workshops and master classes at a great many international venues throughout the world. In 1994 he founded an experimental Rock group "Kxtahpaph", with which he performed and for which he composed most material. He also toured with a live electronic music theatre ensemble called WATT?, performing his multi-media composition 'The Longest Mauvais Quart d'Heure'.

Jos Zwaanenburg's activitites at the CvA: 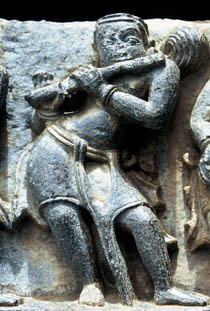